Katie Wilson: Barbara, I’d like to welcome you to the Oral History Project for the National Food Service Management Institute. We have with us Barbara Belmont, the CEO of the School Nutrition Association. Barbara, you’ve been with the School Nutrition Association for eighteen years, which started as the American School Food Service Association. What I’d like to start with Barbara is for you to tell us a little bit about your background, your career, and then how you got into association work. 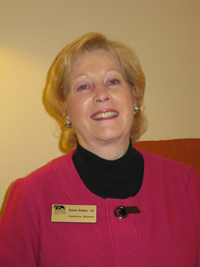 Barbara S. Belmont: I would love to, Katie. I actually started my career as a teacher of American History and Civics many years ago. And then as a young, divorced mother with two young children, I decided to make a career change that would be more financially rewarding. I enrolled at a local university taking several marketing courses while working for a veterinarian to support my daughters. I sought a career in marketing; however, like many people in the Washington, DC area, I magically fell into the world of association management when I was hired by the National Association of Home Builders (NAHB) to help market their magazine. I never planned a career in association management, but from the moment I started working for NAHB, I absolutely fell in love with association management.

KW: OK. And so from the National Association of Home Builders how did you transition to the American School Food Service Association?

BB: Well, this is really going to tell you how old I am, but I was with the National Association of Home Builders for seventeen years and had a wonderful career with them. I started on the editorial and marketing staff of their monthly magazine and rose to Staff Vice-president, Builder and Association Services, within 5 years. After many more years of taking on additional responsibilities and earning my certification in association management (CAE), I felt prepared to become a chief executive officer of a national association. I learned about an opening for an executive director at the American School Food Service Association as I began my search and immediately applied for the position. Having always been a strong advocate for school meals, I felt this might be a perfect match – an association with a mission that I believed in with all my heart.
My research of the association exposed some serious problems such as churning through 11 executive directors in 14 years and dwindling financial resources, but from the time I interviewed with the Search Committee, Executive Committee and the Board of Directors, I felt that we were a good match for each other.

KW: OK. Then the rest is sort of history. Barbara, you’ve been with us for eighteen years. You’ve really seen a lot of challenges and successes in the School Nutrition Association, and you’ve been a part of all of that and you’ve really put the School Nutrition Association in a very strong professional position at this time, so the next thing is I’d like for you to talk to me a little bit about some of the skills you brought to the leadership of the, at that time, the American School Food Service Association, that helped bring us through challenges and still bring us through challenges today.

BB: Katie, just as you were involved in ASFSA early on in your career, I became involved in the American Society of Association Executives, which I’ll refer to as ASAE. I knew that I had a lot to learn beyond NAHB. I knew that there were association executives out there that were outstanding mentors and teachers. The experience and knowledge I gained from ASAE educational programs and networking, as well as being elected and serving as Chairman of the Board of Directors, really enhanced my leadership knowledge and training skills, as well as broadening my knowledge of association management. I must give my participation in ASAE, my professional association, much of the credit for helping to prepare me to lead a national association.
One critical lesson I learned from ASAE was how to transform a divisive Board of Directors into a strong, cohesive group focused on priority issues and future planning. With the help of forward looking presidents, we introduced some new ways to conduct Board business, such as knowledge-based decision making that provides directors background information and time to hold open dialogue on issues before debating and voting. In a trusting and open environment for open discussion, directors focus on reaching the best decision rather than taking sides and debating. The Board quickly adopted the whole knowledge-based decision making. And the use of consensus building through mega issue discussions. It was wonderful to watch over the years the transition from directors who were anxious to put their Board experience behind them to directors saddened when their terms were over. And many directors began putting their names in for vice president or other Board seats. And that was very rewarding for me to see. So I think the whole governance area is something that I feel really good about.

Strategic planning is another area I helped make a difference. I know the association had a long history of planning, but things were changing very rapidly. The rate of change happens at a much faster rate today than 30 years ago, and so we introduced a new way of strategic planning, a 3-year cycle for establishing goals, objectives and strategies. From 3-year plans, we have now moved on to strategic issues management planning which is best for dealing with a rapidly changing environment. With strategic issues management, we focus on the priority issues confronting or about to confront school nutrition programs, members and the association, and annually reevaluate these issues. And set new priorities. And this, I believe, has really helped keep the association focused on the right priorities and putting our resources behind those issues that are most critical to the association.

There is one final item that I wanted to mention to you. I found it interesting that the national leaders had a very regional focus. And rather than thinking of themselves as being responsible for the good name and well-being of the national association, they thought their primary job was to represent the views of the people back home like the House of Representatives. And so we worked very hard to create a national leader perspective responsible for the name, the reputation, the fiduciary responsibilities that a board has, and that they had to make decisions that were best in light of the School Nutrition Association. So that was a major milestone.

BB: Well, let’s begin with finances, because you can’t grow an organization, you can’t enhance what it’s doing, unless you’re financially sound. And when I first took this job the association was going through a difficult period. They had moved from Denver to Washington, DC. Expenses had increased, and the auditors had expressed a great deal of concern about the financial picture, and that ASFSA needed to take some serious steps if they were going to continue to operate. Obviously, good financial practices had to be the number one priority. With the help of O.J. Byrnside, and outstanding leadership, we initiated financial practices that have put us into the good position we are in today. And we continue to do well, even as we’ve gone through the worst of economic times. At the end of every year we’ve had a net profit on our operations budget. And yes, we’ve made a few cutbacks in areas, but in no way have our members been affected by any cuts. That to me is really important.

KW: You know Barbara, the success stories are many, and we could talk about many of them throughout your tenure, but as you have now announced your retirement from the School Nutrition Association, looking back you will take many memories with you. Just share with me a couple of things that will truly be memories that you will hold close to your heart as you move on.

BB: My problem when I start thinking about memories – there are so many wonderful moments that I have had with this association. I have been so privileged to work with the leadership, and what I didn’t expect and what I didn’t know would happen when I took this job was the friendships that I would make. And so when I think about memories I think about the friendships that I have made, the people that have had such meaning in my life, and I hope are going to continue to play a meaningful role through friendship and staying in contact. The presidents are just an incredible group of people and they have provided me such wonderful memories. And Katie even as we talk about memories I think of the time you and Mary and myself getting lost in San Diego and almost getting run over by a train in a car, but those are fun memories to look back on. But there were serious memories as well. It’s hard for me to even pull one or two of those out, but I can only tell you it’s all about the people. And I could separate them in different groups because that’s the most of what I will take with me. There are special moments. There was that moment when the House of Delegates voted for the re-branding, and we became the School Nutrition Association. That was just a very special moment, and there have been many of those moments. Another special moment that I don’t want to overlook is that over the years, going back to 1995, SNA started to take the attitude that any hungry child is one hungry child too many, and that we need to look beyond our borders and see if we can help others. And that was a long road to the day in 2006 when SNA launched the Global Child Nutrition Foundation because the demand and the needs out there were so great and our members have so much knowledge, so much information, and they care so deeply.

KW: Barbara, if you had someone just coming out of school looking for a career, and they were considering child nutrition, what advice would you give them today?

BB: Make sure you are passionate about feeding children because it’s going to be very difficult and challenging career. It’s one of the hardest jobs there is, so you have to deeply care about feeding children and seeing that they are well-nourished. And if the passion isn’t there, this is not the right career for you. If it’s there, you are going to be so surprised to by the many personal rewards that will be yours.