Description: An Alabama native, Carolyn Blake has worked in child nutrition for 37 years.

Linda Godfrey: This is Carolyn Blake, who is retired from the Bessemer City School System child nutrition program. Will you tell us a little bit about yourself, where you grew up and your family; where you went to school? 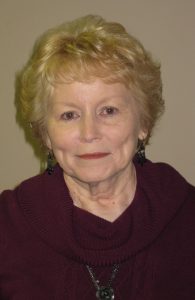 Carolyn Blake: Well, I went to Bessemer City Schools all my life. I grew up a small neighborhood of Jonesboro, which is the school that I worked at for many years. I am married, have two sons and three grandchildren – and child nutrition has been my life [for] about thirty-seven years.

LG: Were you in a desegregated or a segregated school when you were in school.

LG: And did you eat in the cafeteria?

CB: Well, I’m going to tell my age. When I first began school we did not have a cafeteria.

CB: The lady that lived behind us cooked meals for our little, bitty school and we went to her house and ate.

CB: Then they built a cafeteria in the school and that lady came to be our first child nutrition manager.

LG: Really? Now was this at Jonesboro Elementary?

CB: It was at Muscoda Elementary.

LG: And what was your favorite meal? Did you have one?

CB: I guess the favorite meal then, of course like today would be the fast food, because I was raised in a home with five children and we didn’t eat a lot of fast food at home, so that was kind of like a treat for us.

LG: OK. What kind of fast food? Do you remember?

CB: I guess it would be hamburgers.

LG: Hamburgers. And did they have french-fries with those hamburgers?

LG: Of course, you’d have french-fries, wouldn’t you? How did you get involved in child nutrition?

CB: Quite by accident. I was working at the school as a paraprofessional and the cafeteria manager that they had hired when my cafeteria manager that I had when I was young retired, and she didn’t like it, so she didn’t stay. So my principal asked me to go down and kind of take care of things and watch over it until they found someone. And here I am thirty-seven years later.

LG: I was going to say that was how many years ago you were just watching over things?

LG: If you had to say that in your life somebody has been a mentor to you and kind of helped guide you through your career and answered questions and was there when you needed them, who might that be?

CB: Well that would be Linda Godfrey. [Laughter] I don’t mean to embarrass you but – when I went into the cafeteria I studied, I read, I did everything I could, after I found out I was going to be permanent, to know more about the child nutrition program – but when you came to Bessemer you taught me more than I ever learned from a book.

LG: Well thank you. When you were working in child nutrition, working in the school that was after integration, right?

CB: Yes. It was still fairly new there.

LG: What was that like, that change from having just white students in the school and having black students in another school? Do you remember anything about that change and the implementation of it?

CB: Well, I can tell you this. My children also attended Jonesboro, and when my oldest son was in the third grade he had his first black teacher. And he came home one day and said, “Miss Carr gave me a spanking today.” Well, Miss Carr wasn’t his teacher. She was the white teacher across the hall. And I said, “What is going on here?” So I went to find out. And his black teacher told me that she was afraid to spank white children. And I said, “Listen, I want my son to respect you, not the teacher across the hall, and you have my permission to spank.” Of course that’s kind of old-school now, but I wanted him to understand that he had to respect her as well.

LG: What about the children that came to the cafeteria? Do you have any memories of the black children and white children and how either reacted to you, or to each other?

CB: Well, I really didn’t see a difference because children are children, and they’re so uninhibited that they just saw each other as other children, and not a race.

LG: And what about you? How did you feel about them?

CB: I never saw a difference.

CB: Oh, there have been so many changes in thirty-seven years. But I imagine the biggest change – well it’s not really a change, because getting the students to eat what is nutritious, because so many of them don’t eat really nutritious meals at home, and a lot of them had never seen things such as broccoli. I guess that would be the biggest challenge.

LG: Getting them to eat.

LG: Do you remember when we first started working on nutritious breakfast? You worked before breakfast programs.

LG: Can you tell a little bit about implementing the breakfast program and what type of challenge that was?

CB: Well, one of the principals we had was firmly against it. And then we got a new principal and she was ready. And I remember the first day we served breakfast there. I would say we had two to three hundred children.

CB: We sent out flyers of course that we were implementing breakfast, but we were just so thrilled because at the time we didn’t have but about 400 students. So we had three-fourths of the population of the school at breakfast. Of course it kind of leveled off, but we always had a tremendous breakfast program at Jonesboro.

LG: OK. When you were working there can you think of any child or memorable occasion that kind of followed you and helped you get up on those mornings when you really didn’t really want to get out of bed and go to work, because of the way you felt about things?

CB: Well, I have two very memorable occasions. One was a student that the teacher brought down, and she was saying her stomach hurt. She was crying and such, and I told the teacher to leave her with me and I would take care of her and bring her back to class. She came into my office. She kept saying, “I’m so tired. I’m so tired.” And I rolled up my coat and she slept by my desk for two hours. When she got up she was ready to eat, and she told me they’d had family problems all night long at her home. So I felt like I had contributed to more than just her nutritional needs that day. I listened. The other incident was I was out on the courtyard, had been to a classroom, and I came back and a little boy – maybe second grade – rounded the corner. And he stopped still suddenly. He said, “I know you.” And I said, “Yes you do.” He said, “You teach lunch!” And I thought for a minute, and I said, “Yes I do teach lunch.” So I guess those were my two most memorable occasions.

LG: That is neat. When you look back over your career would you have done anything else with your life?

CB: Child nutrition was not what I had planned for my life, but you know, oftentimes you have to learn to bloom where you are planted, and now I cannot imagine me having done anything else.

LG: I agree definitely with that. What would you say has been your most significant contribution to the field of child nutrition?

CB: Well, of course being able to feed children that have needs – we were a low-income school – and being able to work with some students that were special needs and having met their individual dietary needs was a big thing for me. I wanted to see that those children had what they needed as well.

LG: You actually got a USDA Best Practices award for that.

LG: The school was recognized. If somebody came to you and said, “I’m interested in working in child nutrition. That’s what I want to do”, what would you say to them?

CB: You won’t be just a cook. You will be a professional. You should look, act, dress professional, and learn all you can from the mentors around you, people that have been there awhile. But I guess the most important thing is you’re not a cook, you’re a professional.

LG: Have you seen a change in the way food is prepared?

LG: Can you talk just a minute about that?

CB: Well, when I was first there we had dry beans that we cooked all day long, and we peeled potatoes and things such as that. And it’s not to say that [today’s meals] are not as nutritious, but it’s not as time-consuming, and so we’re able to give more to the students. If you have a short period of time to feed eight hundred children cooking dried beans all day is not an option.

LG: So you feel like, and I’m not trying to put words in your mouth, but there’s more time for nutrition education and talking to the children and encouraging them to try different things.

CB: Definitely. I know when I was encouraged to go into the classroom to teach nutrition education I was a little reluctant, but I found that was one of my favorite things to do. Interacting with the children and teaching them – when they would come through the line then they would say, “We learned from you today this and this and this”, and it was very rewarding.

LG: What about working in Alabama in the child nutrition program? Do you think we’re unique in this state, and if so how and maybe relate it to some of the training and the school nutrition association, that type of thing?

CB: Well, I have worked in various positions with the state child nutrition, and I have found that they have always had the students at heart. Oftentimes budget cuts, this and that and the other, new regulations people just whine and cry about, but the children and their nutritional needs have always been important in Bessemer, and as far as training I think we have top notch. I have been to other states to visit, and I just think the leadership and the training that’s provided in Alabama was wonderful.

LG: OK. Anything else you want to say?

LG: I think your family’s benefitted from that too.

CB: Oh definitely benefitted. As a matter of fact my youngest son went into the food service business. He was trained in another area but he loves food service.

LG: He gets it naturally then.

LG: Thank you so much. We really appreciate it.