Description: Debbie Kallio works as a school food server and secretary Alaska and she serves as a regional director for the School Nutrition Association.

Jeffrey Boyce: I’m Jeffrey Boyce and it’s February 17, 2016. I’m here in Anchorage, Alaska, at the AKSFA annual meeting and I’m talking to Debbie Kallio. Welcome Debbie and thanks for taking the time to talk with me today. 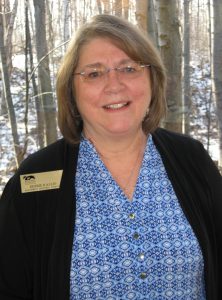 JB: Could we begin by you telling me a little bit about yourself, where you were born, where you grew up?

DK: Sure. I am actually from the state of Washington. I’m here representing the SNA Board for the conference, and Alaska is in my region as a regional director, so I get the chance to come up and visit with them.

JB: What is your earliest recollection of child nutrition programs? Was there a program in your elementary, junior high, or high school?

DK: There was a program, but I didn’t know it as a child nutrition program. It was a program that you went and you were fed.

JB: Was it part of the National School Lunch Program?

DK: There was a macaroni & cheese thing that they cooked. I always remember white bread with butter on it, and I think that was just a filler.

JB: My school had the most amazing mac & cheese.

DK: I think everybody had a really great mac & cheese.

JB: So after high school what did you do?

DK: After high school I went to college. I studied to be an occupational therapist, and child nutrition was nowhere in the realm of something that I was considering doing at all.

JB: Where were you studying?

DK: It was called Green River Community College in Auburn, Washington. So I got the degree there and I came back and I practiced for a little while in the school district. I worked with a grant, and I went in and worked with some of the kids on daily activities of life and that kind of thing, teaching them how to eat, how to get dressed, how to brush their teeth, that kind of thing.

JB: So how did you get involved in child nutrition?

DK: I needed some employment after my kids were born, and I was restless at home.

JB: So you had stopped working?

DK: I had stopped working, yes, and I had my kids, and I have four kids. So then like I said, I had gotten restless I think, so I went to the school because it seemed a natural place to get employment. Still I wasn’t looking at food service. I was looking at instructional assistant, or something else, secretary. But every time I got called to work I ended up working in the ISS room, which is intra-school suspension, and I really didn’t enjoy that. So I thought, you know, I really don’t have to work, so I put myself in that position where I’m getting verbally abused and all that kind of stuff every day. So I started getting calls for food service, and you know I really liked it. My time was spent with other women, and I developed a lot of friendships at that point, and I just kind of naturally stayed there.

JB: Tell me about each of the positions you’ve held.

DK: I started out as a baker in an elementary school, and we covered three other schools with baking goods. And I did that for quite a few years. I did that for about fifteen years, and after a while your body gets really tired of lifting heavy things and burning yourself, and so an opportunity came up that there was a new secretary position in the nutrition office, and I didn’t even think twice. I just switched right over. And I still to this day serve breakfast in an elementary school, but then I go into the office and work as a secretary.

JB: Has there been anyone special, a mentor, or someone who guided or influenced your career along the way?

DK: I’ve had a lot of mentors, and it took me a long time to figure out that a mentor just isn’t a bully who’s trying to get you to do something. A mentor is somebody who really sees the skills that you have that maybe you don’t see yourself. They recognize value in what you do, and they know how to kind of set the wheels moving forward so that you can grow and become a better person in the profession you’re in. So I’ve had quite a few at different stages.

JB: Anyone you want to name in particular?

DK: Dean Hamburg used to work in Washington, in one of our neighboring towns, and he put me on the path to the SNA Board, and I appreciate that from him. He wouldn’t give up and he’d just keep picking at me and say, “You can do this. You can do this.” So I appreciate his diligence in continuing to work on me and get me to say yes.

JB: Do you feel that your educational background helped prepare you for what you do now?

DK: Absolutely not, no, no. As I said, I was a certified occupational therapy assistant, and I don’t think that had anything to do with school nutrition at the time.

JB: So this was all on-the-job learning.

JB: Is there anything unique about the State of Washington regarding federal child nutrition programs?

DK: I would like to say that Washington is really a state that is in the forefront of a lot of regulations and things that are going on. They have a great vision of the future and can kind of tell where it’s going.

JB: Weren’t they one of the pilots in the Fresh Fruit and Vegetable Program?

JB: I remember several years ago interviewing George Sneller and him talking about that. So what’s a typical day like for you, or is there such an animal?

DK: It’s very routine. Like I said, I serve breakfast at an elementary school and then from there I go to the office and work. I process applications. I do a lot of the daily paperwork that needs to be done in the food service office.

JB: What are some of the biggest challenges you’ve faced over your career?

DK: Just having confidence in myself. I’ve been in a lot of positions where I didn’t believe I belonged or I fit. And so maybe that’s where some of those mentors came into play, where they gave me that confidence that I could go ahead and do the next step.

JB: What would you say had been your most significant contribution to the field?

DK: Truly I think it’s been my rapport with members. I feel very comfortable talking to line cooks, managers, and getting their perspective on what their daily job is, and trying to enhance that or make it better for them.

JB: Do you have any memorable stories about special children you’ve served or people you’ve worked with over the years?

DK: You know, I think my heart always goes out to those kids that come in and you just know that they’re not having the best day in their life, or they’re not looking their best. Or they come in and you can tell they’ve been crying. And you just want to find out if there’s anything you can do. It makes you want to watch them a little bit more and see if this is just a one-time occurrence, or see if this is something that is a repeating pattern, because you don’t want to let that slide. You want to make sure that that child knows that he is a special individual. And I’ve been in that situation. I’ve been there with those kids, and know that just the matter of somebody calling you by name, or taking a special interest in what’s going on that day makes all the difference in the world. And those kids are the ones that tug at my heartstrings when they come through.

DK: It’s a hard profession. It’s getting harder. But I would say that it’s totally worthwhile. It is very rewarding, and it’s one that you will love till the day you walk out that door, and beyond.

DK: I don’t know if this would be anything, but I have been involved in my chapter. I have been involved at a state board level. I have been the state chair, the vice-president, the president-elect, the president of the State of Washington, and all the way through I have kept my certification up, but I’ve stayed at Level 1, and that is not because I couldn’t have gone up to Level 2 or Level 3, because I took all the classes that came along, but I wanted other members to know, other line cooks, other managers to know that even at Level 1 they could do some of those things, like become state president, like serve on the board, and they didn’t have to have the Level 2 or the Level 3 or the SNS certificate, that even if they were Level 1, if they had a dream in child nutrition they could obtain that dream.

JB: And what do you do now with the national SNA?

DK: I am the Northwest Regional Director for SNA and I act as a liaison between the states and the national board, and I represent Alaska. That’s why I’m here today. I represent Oregon, Washington, Idaho, Montana, and Wyoming, and I’ve gotten the chance to go to all of those states over the last two years. I will be in Oregon next month and Idaho is one I haven’t been able to make it to, but they are having an executive board member come, and so they don’t need me this term.

JB: Well thank you so much for sharing with me today.

JB: It was a pleasure.