Description: An Oregon native, Diane Buchanan eventually made her way to Alaska, where she worked in school nutrition for many years.

Jeffrey Boyce: I’m Jeffrey Boyce and it’s February 17, 2016, and I’m here at the AKFSA annual meeting in Anchorage with Diane Buchanan. Welcome Diane and thanks for taking the time to talk with me today. 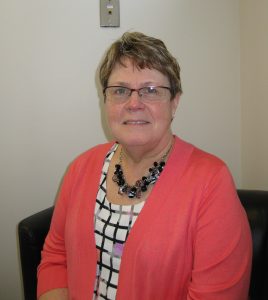 DB: I was born in eastern Oregon, raised on a dairy farm, in a little town called Boardman, and graduated from a high school of a hundred, twenty-five in my class. We all grew up in farming country.

JB: Were there child nutrition programs in your school.

DB: There were. We paid twenty-five cents a meal, five cents for milk. Everything was made on-site. It was the good old days. I graduated in ’73 so that’s pretty old.

DB: I still remember all my old managers. They were cooks. They were friends and family and we always loved them.

DB: Beef stew, beef stew and homemade rolls was the best meal. We had open campus, but the kids never left campus. They always ate right there.

JB: Those homemade rolls were a big draw.

DB: They were, they were a big draw. The least favorite was Fish Friday.

JB: Oh really? Well after high school what did you do?

DB: I married my sweetheart from school and we moved to San Jose, California. And then we moved back to Portland, Oregon, and my husband worked for the Union-Pacific Railroad, and then back to Boardman again, where we owned a Shell station. And then we had an offer to move up to Alaska. My husband went to work for Marathon Oil, started there, and soon afterwards I started in school nutrition to be where my kids were.

JB: So that’s how you got into child nutrition.

JB: What was your original job?

DB: I started out as a substitute, and within a month I was hired to be a cashier at a local junior-high. And then two years later I transferred to an elementary school as a cashier. Two years after that I was hired on at the central office to coordinate all the cashiers.

JB: Was there a mentor or someone along the way that helped guide you in your career development?

DB: There was my favorite person; she still works for the district. She must be seventy years old. She was a baker for one of our high schools. A lovely German woman that just – you know I think all the kids even in the high school just still love her.

JB: So you have a baker still in your district.

DB: No, we do not, but she is still the manager of the school. But boy she could make those chocolate chip cookies that everybody loved.

JB: So what positions after that did you hold?

DB: People started to retire early at the district office. I stayed at the district office until I retired there, and I became the coordinator. I did all the menus, I created the menus, production worksheets, put out the bids, decided what the kids liked and didn’t like. I still ran the cashiering, balanced the money, so that’s what I continued to do until I retired.

JB: And how many students were in your district?

JB: Is there anything unique about Alaska regarding child nutrition programs?

DB: Yes, shipping. Shipping, and a lot of native populations, a lot of small districts. We had three of our schools – the only way you could get to them was to fly to them. So everything had to be flown out to them, and that could be difficult. I remember one time there was an airplane accident, and on the cover of the local newspaper was child nutrition watermelons and everything all over the ground after the plane crashed. And I thought how did those watermelons keep from bursting on people’s heads? That’s the problem that we have there.

JB: What was a typical day like, or was there such a thing?

DB: There was always something new. You started your day about eight o’clock in the morning and it could be six o’clock at night before you finished. Schools would come in and questions would start rolling in. “My freezers are down. What do I do?” “My milk’s not here.” “Oh, no. It’s frozen.” That’s what I took care of a lot.

JB: What were some of the biggest challenges you faced?

DB: I believe it was probably the delivery of our food. We had thirty sites that we delivered to, and getting the food out to them all before the meal started that day. And that was a challenge. A lot of times our food didn’t come in because the truck had broken down, or couldn’t get between Anchorage and Kenai, maybe a milk truck because it overturned – weather.

JB: How far were you from Anchorage?

JB: And all of the district is on the road?

DB: No. We have three native villages –

JB: And everything has to be flown in for them?

DB: Actually we’ve got four, Tyonek, so there are four, yes, and we have to fly in.

JB: What changes have you seen over the years in child nutrition?

DB: Well, when the Healthy, Hunger Free Act came in, changes occurred then. We began a Fresh Fruit and Vegetable Program, which our children loved. We put out fresh fruits to these native villages that could never afford to get that stuff out there, when your milk may be six dollars a gallon, more than a gallon of gas. And when the kids would get like a Japanese pear, or even these watermelons that I was talking about, that was one of the changes, and salad bars in their schools. We got rid of the cookies, the chocolate chip cookies that everybody loved, and all those desserts. That was a change for them.

JB: Was it hard introducing these new products to the children?

DB: Yes. They wanted that and they didn’t want all these vegetables, but I think they’ve come around. I’m slowly seeing that now.

JB: What would you say has been your most significant contribution to the field?

DB: I think the transforming with the Hunger Free Act there, is getting all these schools set up for that, going whole grain, getting the salads and all the vegetables, and creating recipes and menus that the kids would like. That’s what I felt it was. I listened to what the schools were telling me and we went from there.

JB: Do you have any memorable stories of children you’ve served or people you worked with over the years?

DB: I do. When I was working at the junior high, those kids, junior high can be a challenging group, but they come up to you and you’d always have one to say, “Do you have some money? Do you have some money?” or, “Can I have a meal?” And you always do. Those kids – you never let a kid go hungry. I don’t care if they’re junior high or what, you just never let them go hungry. And I had a special boy that you could tell that he was hungry. And I love that boy to this day. And he still sees me. He never paid me back, but I didn’t care. He was just one of my kids.

DB: I would say that that’s one of the most rewarding jobs that you can have. For mothers that’s great because you can be in school when your children are, and not when they’re out. But to be around all those little children, and grown children, is rewarding. And to see that you can feed a child – you can see children that come to school with the same clothes that they left with on Friday, come back on Monday, and you know that they have not eaten all weekend. And to be able to give that child a meal is pretty spectacular.

DB: I am just thankful that we are able to feed our children. They are our future and I’m very passionate about them. And I hope this never goes away.

JB: Well, thank you so much for talking to me.

DB: Thank you so much.

JB: It was a pleasure.