Description: Diane E. Duncan was, as a teenager, an original member of the National Youth Advisory Council for the American School Food Service Association. The ASFSA started this group to learn more about the student perspective regarding school food service. This experience led Diane to decide to make the nutrition field her career. After working with the Rice Council, ConAgra Foods, and the Florida Department of Citrus, Diane is currently with McKee Foods.

Jeffrey Boyce: I’m Jeffrey Boyce and it is July 22, 2008 and I’m here in Philadelphia, Pennsylvania at the School Nutrition Association’s annual conference with Diane Duncan. Welcome Diane and thanks for taking the time to talk to us today.

Diane E. Duncan: Thank you. I am delighted to be here. 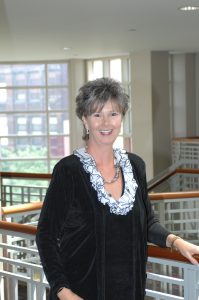 JB: You are a little special case for our oral histories here. Can you tell us about your introduction to school food service and what you were doing as a teen?

DD: Absolutely. When I was in high school, I was nominated to be the Southwest Regional Youth Advisor for the American School Food Service Association.

JB: So that would have been from where? Where were you living at the time?

DD: I was living in Denton, Texas. That was the southwest region and there were seven of us from across the country who were nominated and then selected to represent the youth of the country to help the School Food Service Association get in touch with exactly what was on the minds of the teenagers at that time to increase participation in the schools…particularly, at that point, in high school.

DD: Yes. At that time, very little school breakfast was going on. So, it was mostly just the cafeterias…just wanting to upgrade the image and to get more participation and excitement from the students, on all levels, actually.

JB: So, how did they go about learning from you all in order to implement this?

DD: The first thing they did, they invited us to the national convention. The first convention I ever attended was actually in New Orleans. I believe that was in 1973. That gave us a feel for exactly what the national association was all about. We were introduced to the membership and attended various break out sessions to get to know a little bit more about the Association. I remember meeting Lucille Barnett, Gertrude Applebaum and several of the legacies in this Association.

JB: And Ms. Gertrude is still here with us today. I talked with her this morning.

DD: And Dr. Josephine Martin. I saw her yesterday and spoke with her. So, after we attended the conference, soon after that, they invited us all to attend a workshop or a meeting, I guess, in Denver. That’s when the Association was actually headquartered in Colorado.

JB: Before they moved to D.C.

DD: Before they moved to D.C., yes. And so we all met there. We got to know each other a little better. We had activities so that we could determine some goals of what we were looking at and what they wanted. We just kind of did an interaction group and it was wonderful. We went back to our respective areas, challenged and motivated to see what we could do to build kind of a grass-roots effort. At that point the Association was really looking at doing it from a national standpoint and it filtering down. Later, the focus became more work on the local level and then let it filter up. We were the beginning of what has later become known as the National Youth Advisory Councils…the NACS or the YACS. It was very exciting to be a part of that. We later attended the conference the next year. They had another group of seven from each of the regions that then took over for another year. It was basically a year that kind of grew into a second year.

JB: So, what were some of the things that you took back to Denton to try to implement?

DD: At that point, the cafeterias were so institutional. We were really looking at the appearance of the cafeteria, something to make the students actually want to be a part of the program. We started implementing working with the menus and developing groups that would test some of the foods and get involved with the cafeteria Food Service Directors at that time in each of the cafeterias. So, from that it was great. We started seeing so much participation. Changing color schemes started becoming more popular and you saw more posters start showing up. You saw the cafeteria become a more interesting, exciting place where you wanted to go…where there was some interaction with your students and it wasn’t just quickly come in and eat and get out. There was a feeling that you wanted to be there and you were excited because the foods were food maybe you had helped determine should be on the menu…that you had some input into it. The students started responding to that and the Directors…the Food Service Directors, I think, loved having the input from the students, because then there was just a relationship that was developed between them.

JB: And it’s win-win. It makes their job a little easier and the children get tasty, nutritious meals.

DD: Absolutely. And then from a personal standpoint, I went on to have a love for this organization, and a commitment to child nutrition that I have continued to have in my life forever, professionally. So, I have been very, very appreciative of the fact that I was allowed to be a part of this great organization at a very young age.

JB: Which you say, it led to your career. Tell us a little bit about how from there you advanced on into making nutrition a career.

DD: From there, I graduated and went to college; had a degree in Home Economics with an emphasis in Nutrition.

JB: Where did you study?

DD: Texas Woman’s University in Denton. From there, I knew that I didn’t necessarily want to be in the classroom. I wanted to do something with industry. And I was a little bit of a challenge, I think, for my professors, because they really didn’t know what to do with me. But I kept pushing that I wanted to be involved with industry. So I initially was with the Rice Council for market development and worked with the U.S. Rice Farmers. From there, went with the Florida Department of Citrus, where I was calling on School Food Service Directors. And that is where I was reunited with what I had started so many years before. And, that progressed into going into a sales position with several different companies. ConAgra Foods. I am currently with McKee Foods and so I have always maintained a love and a respect for the child nutrition professionals on the school level. Because, I just have a belief that is such a worthwhile responsibility and job that goes on there. So, from an industry standpoint, I try to support that. And that is the area that I have just always developed and maintained that love for.

JB: Has there been any special person, a mentor perhaps, who helped to guide your career path as you have developed in the nutrition field?

DD: Always, because she was a dear family friend, was Melba Jean Ryan. She was the Food Service Director in the Irving Independent School District there. She and my mother were actually very good friends and college friends. And, she was the Child Nutrition Director, as we would call her now. Back then, I believe her title was School Food Service Director. But, she was very, very strong in this organization and up until just a few years ago, I would always stay in touch with her and enjoyed the feedback that I would get from her throughout these years.

JB: Are there any special stories or memories that come to mind as you think back over your career?

DD: The memory that I have of being a part of that Youth Advisory Council was the close friendships that the seven of us developed. It was, I guess, because we were young and we were in such an exciting position. I think we all knew that something great was going to come out of what we were doing. We may not have had a total understanding of it, but we knew we were at the beginning of something that was really great. And one of the other group members, her name was Kathy Kerry, she and I became very good friends. We don’t get to see each other as much as we would like, but when we do run into each other…occasionally at the conferences or sending notes back and forth to each other. It’s a friendship that was so strong that it just blossoms each time we are together. So, that close friendship was just extraordinary. Again, that goes back to we were involved in something so special.

JB: And what an influence it had on your career choice.

DD: Absolutely, and continues to have it on so many other youth because we were really the beginning of something that continues even to this day. It is very exciting to me when I hear about the Youth Advisory Councils that are going on. They have different names for them now in some areas. And I think, wow, I was there at the very beginning of that and it is still continuing. And it was such a positive influence on me and continues to be on others. I have a daughter who is 12 years old and is continuing to follow in the same footsteps. She did a science fair project recently looking at the aspects of lunches brought from home versus lunches from school and comparing the nutrition values. Of course, school lunches won hands down. And she ended up taking that project all the way to the next level. Everyone was so impressed with it. And it is just so exciting to be able to pass that along…that love for this industry.

JB: It seems like child nutrition is one of the careers that seems to pass down in the families. So many times we run across mothers and daughters and granddaughters…

DD: …that have been involved with it. I think it is because it is such a worthy profession to be involved in.

JB: Anything else you would like to add today?

DD: Gosh. It is just such an honor to be here sharing this with you. It is something I just felt strongly that I wanted to be preserved because it was the brainchild of a few people that has just grown and grown and grown. I played such a small role in it in the beginning but to see that it is continuing…I just don’t want that momentum to be lost.

JB: Well, it has been my pleasure. Thank you for sharing your story.

DD: Thank you so very much.