Jeffrey Boyce: I’m Jeffrey Boyce and it is February 18, 2016. I’m here in Anchorage, Alaska, at the AKSNA annual conference, and this morning I’m talking with Libby Edelman. Welcome Libby and thanks for taking the time to talk with me today. 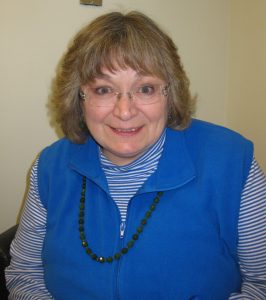 LE: I was born right here in Anchorage, Alaska.

JB: You’re one of the few natives.

LE: Yes. I was born in the old hospital and have lived most of my life on the Kenai Peninsula or down in Valdez, Alaska.

JB: When you went to elementary school did you go here in Anchorage?

JB: What part of the state is that in?

JB: Was there a lunch program or a breakfast program there?

LE: There was a lunch program. There was no breakfast program.

JB: Did you participate in the lunch program?

LE: Sometimes I did, but most of the time I brought cold lunch.

JB: Do you remember any of your favorite menu items when you did eat in the cafeteria?

LE: I think always hamburger day was the fun day.

JB: So what did you do after high school?

LE: After high school I pretty much became a mom for a while until my youngest one was a little bit older and then I started working in the food service at the school district.

JB: How did you get involved with that?

LE: Well I wanted a job that would keep me in pretty much the same hours as the kids had, so I went and applied and they had sub positions open so I applied for a sub position and they kept me very busy for two years doing that.

JB: What positions have you held in child nutrition?

LE: Well when I first started out as a sub they basically trained me in the assistant baker position. Back then they had a salad bar. They also had a sandwich bar. And the assistant cook position would of course support the cook, and they would also do the sliced meats to support the sandwich bar. That’s pretty much what I started out in and then I hired on. I was sent to a satellite kitchen but I often spent the mornings helping at the main production kitchen and then would go to the satellite kitchen.

JB: So how many schools were you serving?

JB: Has there been someone, a mentor maybe, who kind of helped guide you through the child nutrition profession?

LE: I had a boss by the name of Pat Weller that was a big supporter, and I felt like she was a very positive person.

JB: Is there anything unique, I’m sure that is, about Alaska regarding child nutrition programs?

LE: I think maybe it’s harder to get fresh fruits and fresh vegetables at certain times of the year. Of course in the fall you always could get fresh fruits and vegetables much easier, especially in the villages. I think that the main cities aren’t so bad, but when you start to get into the villages, due to refrigeration problems, and just getting it there can be a real problem.

LE: Yes, transportation, because of the fact that many of the villages don’t have roadways everything has to be flown, and so I think that makes it quite unique.

JB: What are some of the biggest challenges you’ve faced?

LE: I think time issues. I think that you are trying to get the work done, and always trying to cut back to save money, so that students will have money for activities and classrooms. So I think they’ve kind of hit the food service program, and I think that that has created quite a challenge in the lunch program. The other challenge is really trying to get students to realize that whole grains are really good for you, and to eat healthier choices, I think is a challenge.

LE: Well now I’m working as the food service manager in the head cook program in the Valdez district, and so a typical day for me is I arrive and I make sure I’ve got my production records going. Some days I don’t have to do the cooking. It’s easier. Some days I’m on the floor doing the cooking. We just started the Breakfast Program about six years ago, and it’s grown a little bit. I’d like to see more growth, but it has grown and I think we’ve tried to make different offerings, different choices there and I think the kids like that. I still am looking at making so more changes like maybe to have hot oatmeal more than one day a week. One day a week we have hot oatmeal and I’m thinking of maybe changing that to two days a week.

JB: Is that a popular item?

LE: As long as you offer something else. I’m just trying to encourage kids to eat something that maybe they might be adding that milk to, to try to get them to drink some of that milk. I think that the students take the oatmeal better as long as – at the high school the oatmeal has really grown – but we serve it with chopped apples with cinnamon on it. You have little cups so you can add your own if you want it. And they also have raisins, a cup of raisins, or the apples. And so some of the students are really liking having that choice. So I think if I can institute that in the two other schools, the elementary and the middle school, that maybe more students might take the oatmeal. So that’s little changes that I’m still working on making. So we serve our breakfast, then we get ready for lunch. After lunch of course it’s closing down and normally I’m working on paperwork and orders or whatever needs to get done.

JB: Do you have helpers?

LE: Oh, yes. We have food service people who help. We have three kitchens and every kitchen has somebody who is helping either doing the cooking or they’re helping doing prep work. And then we have cashiers. When they created the districts they never created one kitchen as the main kitchen. So now we have three kitchens. One kitchen is definitely a satellite kitchen. The high school kitchen has the better sinks and space for creating salad and vegetables and so that is where we do most of our vegetable preparation. And then the middle school kitchen has got the ovens and so therefore we do most of the baking there, proof our breads there, and then transport it. We transport back and forth.

JB: How far apart are the schools?

LE: The high school and middle school are right near each other. It takes about five minutes to walk from one kitchen to the other.

LE: Not bad at all. We have a covered walkway so it’s really nice, especially with the bad weather that we get in Valdez. And so that’s really nice. And then the elementary school is about a mile away.

JB: What changes have you seen in child nutrition over the years?

LE: Holy cow, changes. Some things are for the good I think, and some things, I think they could possibly try to bring back more of the homemade. When I first started we did almost everything from scratch. All the breads were baked right on the site. And like an example, the baker made bread every day. And they made the hamburger buns, the hotdog buns, the dinner rolls. They made what they called a sticky bun every once in a while. It was a dessert. And so the baker was busy always making bread. The dessert maker, of course they made cookies like crazy. Students used to be able to come in the morning and buy cookies and milk from the cafeteria, which of course we don’t do anymore. And that kind of thing is OK. It’s OK for some of the changes. But I would like to see that there’s enough time for them to do more of the baking. Even though it’s whole grain, let’s go to whole grain, it’s good, but let’s go back to doing some more of the baking there instead of everything coming in premade.

JB: What would you say has been your most significant contribution to the field so far?

JB: Do you have any memorable stories about special children you’ve served or people you’ve worked with over the years?

LE: Holy cow! I have to say we have one gal and the students just love her. I don’t care what kitchen you put her in, she’s like a magnet. And I have enjoyed listening to her tease the children, play with the children, talking with them, and they just love her. They walk in the door looking for her. And I think that is something that you want to see in the food service program. You want to have an employee who has the authority to reach out and talk to students and really get them interested in coming through that line.

LE: Well, if you’re going to start child nutrition I think going to the classes is really a help. And I think the other thing is being willing to make lots of changes, because the program changes and you have to be willing to adapt, and I think that that is something you have to do.

JB: Thank you so much for talking with me today.