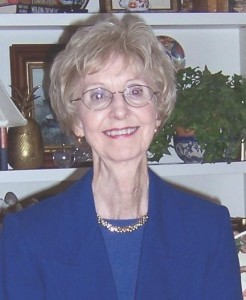 Although her goal when completing a dietetic internship was to be a pediatric dietitian, she actually began her professional career as an administrative hospital dietitian. However after a brief period, she joined the school nutrition program in its toddler years as an area consultant with the Georgia Department of Education.

She has extensive experience in child nutrition programs having been an area school nutrition consultant, a USDA regional nutritionist in the Southeast, and Georgia’s state child nutrition director. Prior to her retirement from the Georgia Department of Education in 1991, she was an Associate State Superintendent of Schools.

Her commitment to healthy children through being an advocate for professional growth, public policy, and education has been recognized through leadership in the School Nutrition Association, where she served as President, and in the Association of School Business Officials, the American Dietetic Association, the Georgia School Nutrition Association, and the Society of Nutrition Education. Dr. Martin has published a number of articles and monographs related to child nutrition. She is widely recognized as a strategic planner, visionary, legislative specialist, instructional specialist, and historian in child nutrition programs. She has made numerous professional presentations in national and state associations and organizations

Dr. Martin has received an ADA Medallion Award; IFMA’s Silver Plate in School Food Service, the Tom O’Hearn Legislative Award, and the John Stalker Award for Distinguished Service in Child Nutrition. In 2006 she received the Gene White Lifetime Achievement Award for Child Nutrition given by the Child Nutrition Foundation. One former Congressional staff leader with whom she worked in the 1970s to achieve legislation that provided for the program expansion wrote a letter upon her selection of this Lifetime Achievement Award. The letter stated, “No unelected person played a larger, more intelligent and more constructive role in the principled expansion of our food and nutrition program than she did…never taking her eye off the prize of healthier, wiser, happier American children.”

Charlotte Oakley: Thank you for being with us today, Dr. Martin. We really appreciate your taking the time to tell us your child nutrition story. Can we begin by your sharing with us the purpose of those programs? And then, we want to talk about your role in being in child nutrition.

CO: Thank you for sharing that with us, Dr. Martin. Let’s start with some of the history of child nutrition programs from 1946 or backward, if you would like, and then when you became involved in them.

CO: Education is certainly very important and the preparation for being qualified as a child nutrition professional, and sometime before we get through with our conversation, we want to talk about that, Dr. Martin, but I want you to pick up from your continuing your education in education. Also, talk more about public policy and how the child nutrition programs truly are public policy. Maybe, some people are not aware of that.