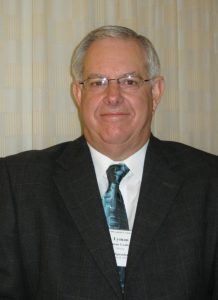 Jeffrey Boyce: I’m Jeff Boyce and it is March 6, 2011, and I’m here at the LAC conference in Washington, DC, with Mr. Lyman Graham. Welcome Lyman, and thanks for taking the time to talk with me today.

Lyman Graham: Well thank you for asking me.

JB: Could we begin today by you telling me a little bit about yourself and where you grew up?

LG: Well I grew up in southeastern New Mexico, about fifty miles from Roswell, where I live now.

JB: So a native New Mexican.

JB: What’s your earliest recollection of child nutrition programs? Was there a school lunch or a school breakfast at your school?

LG: Eating school lunch in a small little district where I grew up and went all twelve years of my elementary and high school years.

JB: Do you remember some of your favorite menu items from those days?

LG: Menu items were enchiladas and chicken fried steak. We were country people, so those were good things. Of course you always remember the hot rolls.

JB: I think everyone remembers the rolls. That’s a favorite memory of mine also. Tell me a little bit about your educational background. Where did you go to school and what degrees did you earn?

LG: I have a high school diploma and that’s where it stops. I went into work experience then.

JB: Ok. What brought you into child nutrition as a profession then?

LG: Kind of by a fluke or a happenstance. I was raised – thought I’d always be a rancher by trade, and ranching got to where you couldn’t make a living, so I was between jobs and a friend of mine was head of maintenance at a school. And part of the perks was you could eat a free lunch if you unloaded the commodity truck, and helped to take out the trash, and clean the cafeteria. So, on my breaks I started helping the ladies wash dishes and what have you, and I didn’t know it but this friend was going behind my back and telling them that I needed to run the cafeteria, because between ranching and being at the school job I had owned a restaurant. And so that’s how he got acquainted with the cooking skills and food service that I had done.

JB: It sounds like he was a pretty good mentor. Have there been other mentors that helped guide your career?

LG: Well after getting into school food service, of course SNA, directors networking, and all of those things have helped me out a whole lot, because you learn a lot from networking.

JB: Tell me about some of the positions that you have held. How did your career advance?

LG: Well, I started as food service director there in a small district. After being there eleven years your Institute even came and brought cameras to my district in Dexter, New Mexico, years ago.

JB: When was that?

JB: I’ll have to look that up.

LG: So they have a film of where they came and filmed what we were doing there. We kind of turned it into a special program, gourmet cooking and so all the kids were eating, all the staff. We did lots of community catering. All of the community came in and ate. It was a small-knit, a farming community. And from there then I was catering a school board meeting, a state school board meeting, and I got hired to another district. And so there I followed a food management company in that had gotten the district into the red and started changing that. Well, two years later a director walked out at another district and they asked me if I would help them until they found somebody. This is eleven years later and they haven’t found anybody. And then after leaving the small district, six years ago they asked me to come back and to that. So now I’m the director of three school districts.

JB: What districts are those?

JB: Is there anything unique about the state of New Mexico in regard to child nutrition?

LG: Well, kids are hungry. There are some culture differences. We’re close to the south border of the United States, so we have a big free and reduced population. We have a lot of cultural preferences to what children want to eat. Those type things I guess might make you a little bit unique, but children are always hungry, and if you will feed them something good they’re willing to eat. If you feed them something they don’t want to eat the trashcan eats, and I don’t want to do that.

JB: I’m always interested in the regional differences. What are some of the things the kids like in your area?

LG: Well of course in our area they love burritos, and they love enchiladas, and those types of Hispanic cultured meals – red chili – those are the kinds of things they like in our area probably number one, and after that then it goes to mashed with some kind of an entrée with gravy, those kinds of things that now the regs say aren’t good for you, so I don’t know exactly what we’re going to do there, but we’re going to continue to feed children.

JB: Do you have a wellness program?

LG: Yes. We have wellness policies in all three districts, so a lot of things are limited. They can’t be brought into the school – very small amount of things that can be sold as a-la-carte. Of course our state, New Mexico, has a nutrition rule, or grid, that really limits a-la-carte sales, so that’s been a big factor in the last four or five years.

JB: Do you find that helpful in trying to meet the dietary needs?

LG: I don’t know if it’s helpful, it’s real restraining. Of course everybody anymore since the wellness policies have come out and what have you, it doesn’t matter what profession you’re in, they believe they’re dietitians, and so everyone has their belief, and whichever has the greatest voice usually wins out.

LG: Typical day starts about five in the morning, breakfast in the classroom for children all over my districts; very good program, breakfast in the classroom, takes it right into the education setting. Kids go to learning quicker, they’re quieter, there’s less tardiness, less discipline problems. Some principals have even given me a little bit of credit for helping them meet AYP, which is annual yearly progress. So I’ve been proud of that. And of course before you can hardly get through with breakfast you’re well on your way to serving lunches, so, a very, very busy day. Of course for my part I love to be in the kitchen and the cafeteria watching kids and seeing that they eat, but as a director you have a lot of administrative things you’ve got to do, procurement, menus, meeting with boards and superintendents and parents, so it’s kind of a 24-7 job that takes up your time.

JB: Do your districts do much scratch cooking?

JB: What are some of the biggest challenges that you’ve had to face?

LG: Well of course I guess your biggest challenge is financial, trying to keep your participation high enough that you can pay for all your food, your labor, your equipment. Most people don’t understand that cafeterias or school nutrition are not funded by education. You’re expected to be your own entity, your own business, and so when you’re getting $2.72 for a free meal, and less than that for the others it’s a real challenge. Most places pay more than that for a latte coffee, and we’re to pay labor, equipment, and put good food on the tray. So that’s a challenge.

JB: What are some of the changes you’ve seen in the profession over the years?

LG: More hats to wear, more regulations, more needs to be a dietitian; I guess those are the biggest changes I’ve seen.

JB: Any special stories about people that you’ve worked with or children that you’ve served as you think back over your career?

LG: Well, I have a wonderful staff. Most of them are somebody’s grandmother, and they treat all of the kids that come through as their own, very kind to children. You find out that the cafeteria is kind of the center hub of the school if your program is well liked or favored by your administrators, teachers, children, so lots of fundraising around the cafeteria, lots of fun times, even students coming to cafeteria for advice and friendship that they don’t get at home or through the counselors, or those things. So those are special times. You become a big family. It has been growing increasingly hard to find good labor. It is hard work in a cafeteria, lots of hours standing on your feet and heavy lifting, so a lot of people are looking for jobs that they don’t have to do that.

LG: Well, do you love children, and are you looking for something that is an ever moving target? I guess I’d give them that advice. Things don’t stay the same. Taste trends change. Government rules change. Procurement changes. Pricing is a big issue. You think you’ve got this on the menu and it’s going to come in, and then there’s a big freeze that comes across the nation and you can’t even get those products. There’re a lot of challenges so I would think that you’d need to be a person that likes challenges, loves to work with people.

LG: Well, I want to thank you for your time and asking me the questions. I’d like to encourage the Institute to continue with their training and encouraging people, and helping us to overcome a lot of barriers that we seem to have between what we know in the field and what they know through what they’ve learned in their studies.

JB: Thank you for your time today.