Mary Davis-Palms: I am an Area Supervisor for the child nutrition program. 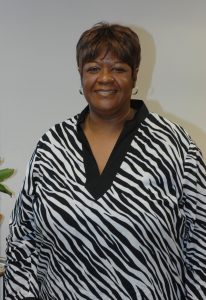 MH: And you have been here for 34 years. Is that correct?

MH: Would you just tell us a little about yourself and where you grew up?

MDP: I grew up here in Baton Rouge, Louisiana, in an area of the city called Eden Park. I was educated in the public school system. I am also an LSU graduate. I worked at Baton Rouge General for 3 years after graduating from college. And then I came to school food service.

MH: So you went to school here in the public school system?

MH: What is your earliest recollection of a child nutrition program?

MH: Oh wow. So that’s your recollection of that?

MDP: Yes that is what I remember. I distinctly remember knowing some of the ladies working in the cafeteria at the time.

MH: Do you remember the meals; what did you get?

MDP: Well, the meals then were like our Cajun Kitchen line is now. Beans, rice, spaghetti, and back then we had meatloaf with whipped potatoes and homemade bread.

MH: Great. So tell me again how you got involved with the child nutrition profession.

MDP: Well after completing an internship at Baton Rouge General and working there for three years, Mrs. Beth Andrews, do you remember her, she was a professor at LSU.

MDP: She thought that I would do well in school food service; in fact she and Anita Sawyer, one of the local dietitians, encouraged me to apply in school food service. They had lots of openings and I was looking for something that I could be off during the summer and it just so happens that I have not been off a summer I have worked.

MH: So those are some of your mentors?

MH: What year was that; do you recall?

MH: What capacity did you start in?

MH: What school was that?

MDP: That was at Dufrocq Elementary.

MDP: Mrs. Cole, the Director, then called and asked me if I was interested in becoming a Manager. And I managed Dufrocq for one year as a single-unit school and the next semester I was given the assignment to manage both Dufrocq and South Boulevard Elementary.

MH: Oh, so you were doing two schools?

MH: Were they two conventional units?

MH: Full kitchens, ok, so it was not like a satellite, it was two full cook kitchens?

MH: You were the roaming Manager, then?

MH: Do you recall how many kids there were in that school?

MH: So there were about 1,000 kids there at the time. And now how long did you do this?

MDP: And then I was promoted to Area Supervisor.

MH: As an Area Supervisor you were given responsibility over how many schools?

MH: So that’s twenty-nine site visits that you would have to do.

MDP: Yes, and some of those were satellites.

MH: Is there anything unique that you can tell us in regard to child nutrition programs in your state?

MDP: Yes, Melba. I think that would be our summer feeding program.

MH: Tell me about that and how you got into that.

MDP: I think I had been working for the school board approximately ten years and during the summer I would do vacation relief for Baton Rouge General.

MH: Were they all originally in schools?

MDP: Yes. They were all in schools, and the second or third year we branched out to do the meals at Southern University for their summer youth program. And from that, we started to incorporate churches and parks. Now we put programs just about anywhere there is need. The unique thing about summer feeding is hunger doesn’t end when school ends, so we try to service as many students and children in the program that we can during the summer.

MH: Do you happen to know how many that is?

MDP: This past summer we had 89 or 90 different sites, and it’s like you said, churches, parks, schools. Back then we didn’t have school year-round; we would have the schools open for summer feeding. But this past year we had 55 schools open, because of the extended year programs and summer school programs in our schools. So over the years it has totally changed from no school during the summer to approximately half of our schools open with classes.

MH: So there is more training going on for students, so therefore you have an audience there for summer feeding. And so the Managers come back and do that or…?

MDP: We have Managers and we operate from five kitchens. We have four kitchens that take care of the lunch and one kitchen that satellites the breakfast meals. And from those five facilities we service the schools, churches, and the parks. The Managers actually manage those production sites; in the school sites, church sites and park sites. We have technicians or volunteers. We do training sessions where I train them to operate the summer food program.

MH: What changes have seen in the child nutrition program over the years?

MH: All right, thirty-four years; you can tell us a lot.

MDP: Yes, yes. When I first started in school food service we cooked all of our food from scratch pretty basically. I remember we made bread, we cleaned the chickens; not per se, but we had chicken that needed a lot of cleaning. We cleaned our lettuce; we cooked cabbage.

MDP: Yes, heads of cabbage. We had to clean, core those and cut them to steam. We made all of the cakes from scratch, and bread. We made lasagna, made the pizza, and we fried the food. Now, we don’t do that anymore. It’s amazing the change. Now that since labor has gone out of the roof, we tend to pay more for labor and get the food that is prepared, pretty much made. I can’t think of all the changes that over the years we have had to make; because of certain circumstance we have had to take another stand on how we actually operate food service. And I am grateful that I had an opportunity to be a part of that, and in some of the decision making, and actually having had a background actually in the schools, in this position as an Area Supervisor, I can see where my input made a difference. Because I actually know what the Managers are facing.

MH: And you can relate.

MDP: And relate to it, that’s right.

MH: You talked about labor. How are the folks out there? Are they the same as when you first went out there?

MH: What do you see in the difference?

MDP: Let me tell you, when I first went to Dufrocq I had a staff of… at that time I thought they were older ladies. But they were dedicated, hard working, loyal, punctual, dependable, caring people. They cared about the children. They wanted to do a job well and they went the extra mile. Over the years it evolved to where we are having to look for people to fill spots, and we don’t necessarily get people with those qualities now. And the level of knowledge to work in the kitchen is now almost non-existent, because everything is fast.

MDP: Yes, and that is what they are accustomed to. And I find that the employees… now don’t get me wrong we have good employees in food service. And those are the ones we try to harvest and keep. But when we need employees, the labor force is so scarce, and they do not have the qualities we need to get the job done. That’s what I see, they don’t want to work hard, and even though we have taken strides in changing the food we prepare and purchase, you still need a certain amount of work to get the meal.

MDP: But we have been able to harvest a few.

MH: And depend upon them.

MH: So, do you have any memorable stories; what comes to mind over the years in your profession?

MDP: The supervisors; as a group, we would laugh about things that have occurred during the work day. I didn’t mention what took place when the computers were put in the schools.

MH: Tell me about that.

MDP: One thing is that even though the Mangers work with the computers every day, when we tell them to do a certain procedure on the computer the name that they give it isn’t actually what we intend for them to call it like defroging the computer rather then defragging the computer and things like that, funny things. The time when, I think it was when a mystery cat was getting in the school and we couldn’t figure out what was going on, I think it was at Baton Rouge High, but it’s a lot of fun. And having been here 34 years I must enjoy it because I have had some good days in food service and some funny things to happen.

MH: So you had a cat go into a school?

MDP: Yes, a cat was getting into the school and we couldn’t figure out how he was getting there.

MH: Well did they find him?

MH: Was it somebody letting him in?

MDP: Yes, it was funny; it was a mystery.

MH: But the ladies have learned to use the computers haven’t they?

MDP: Oh yes, pretty much. Most of them have mastered the data they work on. And they realized even though most of them were afraid to use it they now accept it and it is a part of there work day, and they see a lot of good things come from using the computer.

MH: Well that’s great. Well what advice do you think you would give to future people who are considering child nutrition programs as a profession?

MDP: My advice would be that it is a very rewarding career, and if they are interested in management it is fulfilling, the management end as well as the production end. Because we are feeding the minds of the future taking care of them and it’s a good, rewarding career and I would recommend it.

MH: Well that’s great. Well thank you Mary I appreciate you being here.