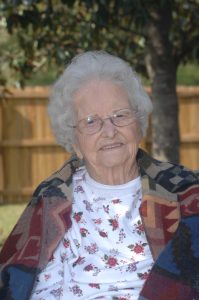 Description: Ora Mae Reeves did school lunch before there was school lunch. In the depths of the Great Depression, with four children in public school, Mrs. Reeves walked two miles in rural Vernon, AL, to volunteer to cook hot meals for the students, who brought a canned good from home as payment for their lunch. Update: Ora Mae Reeves, age 101, of Vernon, Alabama, died Jan. 31, 2012, at Aurora Australis Lodge in Columbus, Miss.

Virginia Webb: This is Mrs. Ora Mae Reeves. Her maiden name was Jackson. And I’m here in Columbus, MS. Today is November 9, 2007. My name is Virginia Webb, and we’re here to talk to Mrs. Reeves about some of her experiences. We want to start out by getting you to tell us a little bit about yourself; where you grew up and what happened over a few decades of your life.

Ora Mae Reeves: Well, I was born in Lamar County, Alabama; lived in the county all my life. I’ve never lived over a couple of miles from Vernon, Alabama.

VW: What’s your first recollection of going to school and what was the lunch program like then?

OR: It was a long time after I went to school before there was a food program.

VW: Tell us where you went to school and what the children did for lunch.

OR: I went to a country school. It was a church house and had been converted into a school. Earlier they had two teachers, but when I started there was only one teacher and six grades. And that man was one of the best teachers, Grady Boman. I guess I learned more during those years there than anywhere else. I was scared of him.
[Laughter]

VW: When you went to school did you carry your own lunch?

OR: Yes, in a bucket. Later on Papa and Mama could afford dinner boxes, but we started out just in a bucket. And usually lunch consisted of about what we would have had at home, biscuit and sausage and probably a baked potato; sometimes a fried pie.

VW: What’s your earliest recollection of a school lunch program or feeding children at school?

OR: Well, it was in the early 1940s, 1942 or 1943, and the principal of Lamar County Schools was G. S. Smith, and his wife was really a worker. The school building had an extra room that didn’t have much in it except an old coal-burning stove. Mrs. Smith converted that into a kitchen. We had a PTA meeting and she asked for volunteers to help with the food. My sister-in-law and I were two that volunteered to work there.

VW: What was your sister-in-law’s name?

VW: Can you tell me how you helped out?

OR: We cooked on that old stove that burned coal. I think we had water in that kitchen. We sterilized the dishes in a washtub sitting on top of that stove boiling. Some of the food came from the government, but a lot of the food came from home; canned items children brought in, canned beans and different things. And we would cook it up and send it to the classrooms. The teacher would then serve it out to the children.

VW: Did you then have dishes that stayed there at the school?

VW: What other kinds of things did you cook?

OR: We had an oven of some kind. I can’t remember much about it, but we did bake bread, and we did bake cookies occasionally, and we baked a lot of muffins. We would bake muffins and put pecans in them. The children really loved them.

VW: Did you have children in school at the time?

OR: I had four. They were all in school. They caught a bus from our house and Dessie and I walked to the schoolhouse.

VW: And you did all of this as a volunteer to help out the children?

OR: So they could have at least one hot dish a day. You remember this was back during the Depression. There were lots of children that didn’t even have breakfast, much less their lunch. So this lady, Mrs. Smith, oh, she was a worker and a sweet person. So she thought it would help those children if they could have one hot meal a day. And that’s what we did.

OR: Superintendent’s wife. She really didn’t have a position in the school. She just worked.

VW: So, at this time, it was before 1946, when there was really a government National School Lunch Program.

VW: How long did you do this volunteer work?

OR: It wasn’t too many years before things began to improve and they built a lunchroom. That’s where they served the meals then.

VW: And this was all in Lamar County, Alabama?

VW: What kinds of things can you see that have changed over the years?

VW: Can you tell us what a typical day was like when you were doing this work at the school?

OR: Rough! It was get up at home, get my family off to school or work, get things done around the house, and then WALK down there and work; start another day’s work!

VW: About how far did you live from the school?

VW: And you did this regardless of the weather?

OR: The school bus, a pickup truck with a bed built on the back of it, was pretty well loaded with children. But part of the time we could ride, especially if it was raining. We didn’t work every day. There were several women, I don’t remember any names, but we all volunteered. I think Dessie and I worked more than anybody, maybe because we just had more time.

VW: What was your favorite part of helping out with the lunches at school?

OR: Finishing up I guess. [Laughter] No, it was just seeing the hungry children fed, knowing that some of them probably had not had any breakfast. And they enjoyed it. You know, back then you couldn’t buy lard, you couldn’t buy sugar. We got a lot of meat from the government, just side meat. And we’d fry that out and use that grease to cook with. They were just throwing that meat away, and my sister-in-law told them the kids would eat the meat. So we tried it and they LOVED that meat with cornbread and vegetables. We didn’t waste nothin’; it was all saved.

VW: Did you have any kind of storage, or how did you keep the food?

OR: We didn’t have any refrigeration at all. We just used what we cooked.

VW: And some of the students’ families sent food to be cooked. Was there any money at all to purchase items, or was everything donated?

OR: Everything was donated. There was no money anywhere at that time.

VW: The pots and pans and plates and bowls, was that all donated too?

OR: They were all different kinds, so I am sure it was a donation.

VW: So it wasn’t a matched set of anything?

OR: No, never heard of a matched set! [More laughter]

VW: Does that school still exist?

OR: Vernon has a huge new school; beautiful grammar school!

VW: And were you cooking for the grammar school children?

OR: I was cooking for the sixth grade on up. It wasn’t the small children. It was teenagers mostly.

VW: It sounds like you did something really good for the children of the town.

OR: I don’t know. I guess that lunch helped out a lot. And as I said, it was all volunteer. During those times we HELPED each other. We didn’t expect pay for it. There was another interesting thing that happened in Vernon about this time. I don’t remember exactly who was responsible for it, the state or the county, but they put in a canning plant. It was a large cement block building with a furnace and a big vat of boiling water where the cans were processed. Everyone could come in with whatever they wanted to preserve and buy the cans for 2 or 3 cents apiece.

VW: What sorts of foods did you preserve?

OR: People canned corn, peas, butterbeans, spinach, tomatoes, mixed vegetables, ketchup, and applesauce. There was a machine that sealed the cans and you had to put a label on right then or you wouldn’t know what was in the can.

VW: Was this canning plant open the whole year.

OR: No. It was just seasonal, when the vegetables were coming in.

VW: Do you remember anything about the WPA (Works Progress Administration) in the 1930s and 40s?

OR: I know it was a blessing to the people. They were so glad to get a job that paid!

VW: What kind of jobs did the WPA provide around Vernon?

OR: They kept the roadsides cleaned off and repaired the bridges. They used a team of horses to pull a machine to clear out the ditches. And rather than pay certain taxes, the men would work for a day or two a month to get this work done. This paid their taxes.

VW: From what I’ve read there just wasn’t any cash money during the Depression.

OR: That’s right. There just wasn’t any. There were a few people that had money, but they held on to it! [More laughter]

VW: And this was also about the time of World War II.

OR: And all our boys were going off to service. I had two boys and my daughter and her husband all in service at the same time.

VW: I guess those times made people stronger. It seems like when you live through tough times you learn to make do and to be happy with what you’ve got.

OR: Yes. We were even glad of old feed sacks to work up. We saved every one of them.

VW: Well, you certainly have shared with us an interesting story. Thank you for your time today.