Description: Sandra Ponte is a child nutrition manager in Alaska.

Jeffrey Boyce: I’m Jeffrey Boyce and it is February 17, 2016, and I’m here in Anchorage, Alaska, at the AKSNA annual meeting, and I’m speaking with Sandra Ponte. Welcome Sandra and thanks for taking the time to talk to me today.

Sandra Ponte: Thank you, nice to meet you. 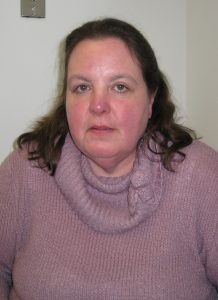 JB: Could be begin today by you telling me a little bit about yourself, where you were born and where you grew up?

SP: I was born and raised in Detroit, Michigan, a little outside of Detroit. I graduated from there and moved to Colorado for about ten years.

JB: When you were there in school was there a child nutrition program in your elementary or high school?

SP: Yes there was.

JB: Did you participate?

SP: I helped out once in a while when I was a kid.

SP: You know I can’t, I don’t remember a whole lot from then.

JB: And then after high school you moved to Colorado?

JB: And what did you do there?

SP: I’ve done everything from dishwasher to executive chef and everything in between. I worked at four- and five-star hotels, ran banquets.

JB: Well how did you get involved in the child nutrition profession?

SP: When I moved to Alaska there weren’t a whole lot of big hotels and restaurants to work in that weren’t in the big city, and I didn’t want to be in the city. So when I moved to Cordova it was a small fishing town. It just made sense. I loved kids and I loved cooking, so when the job became available I took it.

JB: What part of the state is that in?

JB: Are you on the road?

JB: So tell me about that. Are supplies by boat or is it flown in? How do you do that?

SP: Most of our groceries come in on the barge. Some get flown in, not often unless we get some kind of an emergency. But most of it comes in on a barge.

JB: Does it ever freeze over there?

JB: So you have to do a lot of preplanning.

JB: Tell me about your position there. What do you do?

JB: Ok. So how many schools are you responsible for?

JB: And how many employees?

SP: I’ve got three ladies that work with me.

JB: Ok. And how many children are you feeding?

SP: We’ve got about 130 that we serve every day at the grade school and then right around 100 at the high school and junior-high.

JB: Is there anything unique about Alaska regarding child nutrition programs?

SP: Oh, I think there’s a lot unique about Alaska.

JB: Tell me about that.

SP: Some of the challenges, like you said, does it ever freeze up there, a lot of times my produce will come in frozen if it comes in at all. The storms delay the barge. So you’ve got to drop back and punt quite often.

JB: So what kind of backup plan do you have if the produce is frozen?

SP: I usually have enough fresh stuff in the fridge to work with. Sometimes you’ll hit the grocery store up. But there’s always canned and frozen to fall back on in a pinch.

JB: What’s a typical day like for you, or is there such a thing?

SP: Yes, so that’s the first thing I start in the morning, is get my dough going, and get breakfast set up. We do the Fresh Fruit and Vegetable Program, so I have a gal that comes in at seven three days a week to take care of that. Then the rest of the staff comes in about eight, and I’ve got breakfast ready to go by then. One gal takes breakfast over to the high school and serves over there and then we serve at the grade school. That’s where our central kitchen is.

JB: So you bake all the breads. How did the transition to whole wheat go?

SP: Not bad, because we were already implementing a lot of that before the regulations went through. It has made it more difficult with some items. Some of the things that I don’t make are like English muffins and bagels. They’re just too time consuming. So trying to find a good product that still meets the regulations has been difficult, but it’s getting better.

JB: But the kids are responsive to the whole wheat bread?

JB: So what are some of the biggest challenges you’ve faced?

SP: In the beginning I think maybe getting over the restaurant mentality into the child nutrition mentality. With restaurants it’s give the customer what they want. With child nutrition it’s a lot deeper than that. You want to give them what they want, but it’s also got to be good for them. I think that’s probably been one of the biggest stumbling blocks, but I’m over that now.

JB: What changes have you seen in the profession over the years?

SP: Quite a bit. I came on just as the big changes were happing, and I had never dealt with child nutrition before then. I mean I’ve been doing food service since I was sixteen, but you never dealt with child nutrition. But these changes, having to analyze menus and recipes, and all that, that was pretty major, but now with all these changes with the whole grain and the sodium – you know, you get them used to one thing and then it changes and you’ve got to get them used to another thing. That’s been the biggest hurdle.

JB: Do you find participating in meetings like this with the state association helpful?

SP: Absolutely, yes. For one thing, knowing that you’re not the only one struggling with these issues has been tremendous. A lot of people have great ideas and a lot of good problem solving, and it really amps you up for the rest of the year, because you can get stuck in a rut. You have to come to a meeting like this, you’re excited again. It’s good.

JB: What would you say has been your most significant contribution so far to child nutrition programs in Alaska?

SP: I don’t know, I guess just all the different programs I’ve gotten going just within my own school district. When I first came on board there was a lot of processed stuff, and we’ve gone to more homemade whole foods instead of the processed. We started the Fresh Fruit and Vegetable Program. We’ve got the Afterschool Snack Program. I think probably the biggest thing for my community would have to be the Summer Meal Program.

JB: Tell me about that.

SP: We do free breakfast and lunch for any kid eighteen or under all summer long, and we feed almost as many during the summer as we do during the school year. It’s been such a tremendous help for the families and the kids love it, and now that we’ve been doing it for seven or eight years the kids that got used to it in grade school are now in high school so now we’re starting to get the older kids to come, which is nice.

JB: Any memorable stories about special children you’ve served or people you’ve worked with over the years?

SP: A million of them and the kids are just awesome. I get more hugs in one day than most people get in a week. To have to single one out I guess that would have to be Rosie. She’s got multiple sclerosis. I think she’s wheelchair bound now, but she’s always been one of my favorite kids, and anytime she sees me she’s got to come rolling over. She’s in high school now, but she’s such a doll.

SP: Have patience, lots of patience.

JB: Well thanks for taking time to talk to me.