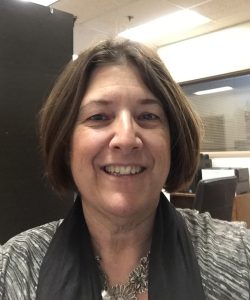 Jeffrey Boyce: I’m Jeffrey Boyce and it is February 17, 2016, and I’m here in Anchorage, Alaska, at the BP Energy Center for the Alaska SNA conference, and I’m speaking with Teresa Harwell. Welcome Teresa and thanks for taking the time to talk with me.

JB: Could we begin by you telling me a little bit about yourself, where you were born, where you grew up?

TH: I was born in California and grew up in Northern California, a little town called Grass Valley, which is about an hour from Sacramento. And I moved up to Alaska in 1983 and we’ve been here ever since. I didn’t start working for the school district until like 1992, and before then I was doing noon duty helping out my kid’s classroom. We had a position come open in the cafeteria at the elementary school, and it seemed like we had a substitute after substitute after substitute, and I was doing noon duty so I called the lady who used to work there, and I said, “Doesn’t anybody want to do this job?” That’s all it took. So then I started working for school nutrition in ’92 and I went through all the levels from elementary to high school to back to middle school and then back to high school supervising them, and am now a coordinator for the high schools and some elementary schools.

JB: Before we get into that could you tell me your earliest recollections of child nutrition programs? Was there a program in California in elementary school?

TH: Actually the elementary school I was at – it was a little town – and we didn’t have a program, the National School Lunch Program or anything like that. The only thing we had was hotdogs, that was it, once a week. Other than that is was sack lunches that you brought from home.

JB: OK. Did you do that all the way through high school?

JB: Do you remember what some of the menu items were?

TH: Sure, things like burritos and milkshakes and french fries. It was all stuff that teenagers would buy, that we can’t serve anymore.

JB: And then after high school what did you do?

TH: Then I got married. I had two daughters and my youngest one was only eleven months old when we moved to Alaska. We moved to Anchorage. My husband came up here working for the newspaper and we’ve been here ever since.

JB: OK. You said you questioned why there was so many turnovers in the position and that’s how you got into child nutrition?

TH: Yea! It was like our cafeteria managers where my daughters went to school – there was never a permanent person in the position so I called the lady that used to be the “lunch lady” and I said, “What’s the matter? Doesn’t anybody want to do this? How hard could this job be?” And so I got into it. I’ve enjoyed it. I love the kids, and I worked in the elementary school level alone for like eleven years before I changed to the upper secondary level.

JB: What’s a typical day like for you, or is there such an animal?

TH: OH, there is no typical day. Now I supervise all of the high schools in Anchorage in the cafeterias, and two of them went CEP a couple of years ago.

TH: The Community Eligibility Provision. At East High School they are now serving almost a thousand kids every morning for breakfast, and almost 1,200 for lunch, all in one lunch period.

TH: Yea, it’s just amazing. So I – anywhere from employee issues to checking over, making sure they’re doing their paperwork right. I also have some elementary schools I supervise. And we have afterschool programs at the high school also. So that’s three meals a day that the kids are getting at two of our high schools that I go in and make sure that everything’s operating right.

JB: Is there anything unique about Alaska in regard to child nutrition programs?

TH: Not being able to get fresh fruits and vegetables, at least not at a really good price; everything’s so much more expensive because we have to have everything shipped here. Bananas come in and they’re green, green, green. They gas them and you hope that they will be ready to serve. So I would say that the biggest thing is just getting good fruits and vegetables up here. A lot of kids, because we don’t have them available as much, they don’t eat them as much either, so –

JB: It’s not a food they’re familiar with?

TH: No, because they don’t get that all the time. I grew up in California where we had a garden out in our back yard – go out and pull a tomato right off the vine and eat it – and we don’t get that here.

JB: That’s a shame. What are some of the biggest challenges other than the transportation issue you face?

TH: Just getting kids to want to try new things. There are a lot of kids that with the way our economy is now they just don’t have the money available, and so even getting them to know it’s there. We have something to offer. Try something new. With the regulations we have they’re just like “I don’t want to eat that. It’s not white bread.” So, getting kids to try new things; once they get into the habit of eating something it’s like “Wow, that isn’t so bad.” We’ve seen it with the new regulations. Kids are starting – our numbers are picking back up. So kids are trying things. Now if we could just get them to eat sweet potatoes. That’s been a really difficult one.

TH: Yea, a lot of kids don’t want – high school especially – you have to have that orange vegetable in there, and they just don’t want them. We’ve tried tots and that’s been real difficult, to get them to eat those sweet potatoes.

JB: Is it just a product they’re not familiar with?

TH: Yea, sure. I mean in Alaska who grows sweet potatoes? Not very many people. So if they were from the South, that was something that they ate down there. I didn’t really grow up much on sweet potatoes.

JB: I love sweet potatoes. I’m from the South.

TH: Yea. We had them at Thanksgiving time. I never ate them. We just brought on a new lattice fry at the high schools, and I had to cover as a manager that day, because we didn’t have a manager for one of our schools, so I went in there and I was cooking up these sweet potatoes, a brand new product, and thinking “Oh gosh, I don’t like sweet potatoes,” but they were good. I tried them and they were good. So when you just get the kids to try them.

JB: What other changes have you seen in the profession over the years?

TH: Just trying to get the consistency of a good work force, people to come in that really want to come in and help take care of the kids. Sometimes it’s not being able to find people. We have at the Anchorage School District a lot of jobs that are open, yet we can’t get them filled. We’ve had manager positions open all year. And so getting qualified people in to work for us has been real difficult.

JB: And why do you think that is?

TH: I’m not sure. Part of it is probably they’re not full-time, and everybody needs benefits. Everybody wants to get a job where they can go somewhere, and it just takes so much time if you can’t just get into a position that offers benefits. But it’s such an important position. It’s so important. These kids need to eat. We need people that can safely prepare our foods and feed our kids, and unfortunately they aren’t those jobs that pay those benefits.

JB: What would you say has been your most significant contribution so far to the field?

TH: Just being out there. I love working with people, being able to help share the knowledge I’ve had over the years, and getting other people to come in and do the job too, and helping train them, and just working with them. I have more fun going in and stepping in and helping with my managers or whatever when I go into school. It’s stuff that I don’t get to do anymore as much, but I love doing it. I go in and I’m right there to help pick up that food and scoop up with the rest of them, and anything else that it goes with. It’s just so amazing to see kids, even on Facebook, from back in ’92 when I started. Just last year I had one girl that said, “Weren’t you my lunch lady?” She got on Facebook and saw my name. So it was kind of cool to be able to say, “Hey. What are you doing with your life?” But just the impact that you make on kids that you don’t think; you walk in the grocery store and they grab you and say, “Mom, Mom, this is my lunch lady!” It’s kind of cool the impression you leave on kids, that you think you have nothing and you’re just there making their lunch. It’s like it’s not important, but they remember. Years later they come back and say, “Wow, I remember you.”

JB: Any other special stories about children you’ve served or people you’ve worked with over your career?

TH: Yes. There currently working in one of my high schools that I supervise, we probably have one of the oldest school nutrition workers probably in the state. She’s eighty-nine years old, or just about. She’ll be eighty-nine in April. They actually did a news article on her. One of the news crews came out last year on her eighty-eighth birthday and interviewed her. And she’s just this cute little old lady, and it was just so funny. One day when I went to talk to her after her interview, and I said, because on her interview I hear she said, “Oh, I was just such a troublemaker.” And I said, “Liz, what do you mean you were a troublemaker?” She goes, “I used to be a tomboy. I used to climb trees and…” But she cuts all of our Subway bread at East High School every day, two to three hundred loaves that she has to slice, and at eighty-nine she still wants to work for us. It’s just amazing.

TH: That it’s so beneficial. You may not think you’re important, but you are. You make such an impact on these kids’ lives. Some of them, this is the food they get for the day. They may not have much at home. You know, we hear stories about over the weekends when they’re not in school, they get breakfast, lunch, and then some schools dinner now, and they go home weekends there’s nothing. So it’s really important to be a good role model so they can become a really good person as they grow as a citizen of this country, and that you’re important and they’re important, and make them feel important. I love my job. I don’t know what else I would want to do. This has always been really good.

JB: Thank you for taking the time today.