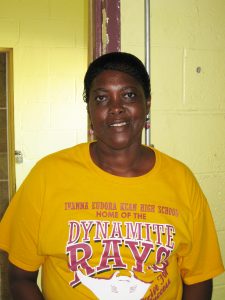 Description: Audrica Richards is a school foodservice worker in the Virgin Islands.

JB: I’m Jeffrey Boyce and it is June 27, 2016. I’m here in Red Hook on St. Thomas in the Virgin Islands, and I’m here this morning with Audrica Richards. Welcome Audrica and thanks for taking the time to talk with me.

AR: You are welcome.

AR: OK. My name is Audrica Richards. I was born on the island of Dominica, Commonwealth of Dominica, and after school I came here when I was like twenty-three years of age, and then I migrated here and married. I have two children. One if my sons attend school right here. My daughter, she is in college. She graduated in 2012. She live in Houston, Texas.

JB: OK. So you went to elementary and high school there?

JB: Were there school lunch programs there?

AR: No. We had to go home for our lunch every day.

JB: OK. That’s pretty common in the islands isn’t it?

AR: Yea, yea. But that was how much years ago?

JB: So after you got here, how did you get involved in child nutrition?

AR: Well I had applied for the program and they call me and I had an interview, and I was accepted because of my early stage of working I used to work in restaurants before since I came here, and hotels. And I had owned my business. I had a little business of myself, which I owned for like sixteen years. But because of circumstances I had to close it because things were slow.

JB: What was it, catering?

JB: I’ve always wanted to do something like that. What did you call it?

JB: OK. That’s great. Well once you got into child nutrition has there been a mentor or someone who kind of helped guide you along the way?

JB: And how would they help you?

AR: In every area.

JB: So what positions have you held in child nutrition?

JB: And what’s a typical day like for you?

AR: We serve the lunch for the children.

JB: And what are some of their favorite menu items?

AR: No, they prefer the white one.

JB: Maybe they’ll get used to it.

JB: Is there anything unique about the Virgin Islands regarding federal child nutrition programs?

JB: Is there anything unique, something that’s only done in the Virgin Islands, about feeding children in the school?

AR: You know, with my experience working for myself I deal with a lot of people, children, the junior-high school, I used to serve a lot of them, so I have like an experience.

JB: So you’re used to dealing with people.

AR: Yea, I used to deal with them because I had the little snack shop, so I do that before.

JB: What are some of the biggest challenges you’ve faced? Have there been any problems?

JB: And how long have you been doing this?

AR: It’s just a year now since I am in the program.

JB: What do you think is your most significant contribution to the child nutrition program?

AR: Taking care of the kids and lookout for them and so, encourage them and so.

AR: They just have to be responsible and know how to do service, general service, because we’re dealing right here with the young adults and you know, sometimes they get a little out of control, so you just have like to correct them in a small way. You can’t talk to them like rough, so you have to talk to them in a way like it’s your brother or your sister, in a calm way, and so, yea.

JB: Well thank you for taking the time to talk to me.