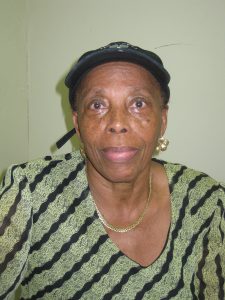 Description: Belinda Moitt is a school cook in the Virgin Islands.

Jeffrey Boyce: I’m Jeffrey Boyce and it is June 27, 2016, and I’m here on St. Thomas with Belinda Moitt. Welcome Belinda and thanks for taking the time to talk with me.

JB: Could we begin today by you telling me a little bit about yourself, where you were born and where you grew up?

BM: I was born in Antigua, British Virgin Islands. I grew up most of my life in Antigua. I migrated here in ’61, October something, ’61, and I’ve been here ever since.

JB: So you went to elementary school on Antigua?

JB: Was there a school lunch program there?

JB: Because it was a British island, right?

JB: And they do things different. So what brought you to St. Thomas?

BM: Well, you know, Antigua’s hard on your family. You come off the island to get a new beginning then. So I had some friends who said they’d been to St. Thomas, and they have known somebody which wanted some maid or something, so you start out with a maid. So that’s what I came and did, some maid work. And I move on from there and I’ve been to a restaurant they had called Happy Mongoose years ago, and worked there for about maybe seventeen years I think. When you work one place you don’t like to move. So I do a couple of maid jobs first, and then do some restaurant work, and then after that I think the boss had died and he had Happy Mongoose, but since he passed away nobody want to do the business, family didn’t want to bother with the business, so he had to close. So then after they close then I went to some other Mexican restaurant on waterfront. That name’s coming. That’s so many years ago, so I can’t remember everything. And I did a little bit there, and then the opportunity came, a lady were leaving, and she had a small restaurant, so she asked me if I wanted it. So I take it and some partners, my brothers and so forth. So I take it for a little while and then we had to close out the ending, and the next opportunity came somewhere down by Fitelco area in Simondale, had an excellent restaurant there. So I run that for a couple of years until things get bad, the rent going up and so forth. And I leave it in ’01 I think that is. And then I look around for something else to do and then I think I had put in an application for school lunch. At this time it was Ms. Huggins. So I waited a little while and then the opportunity came and they needed a cook, so I got the opportunity. So I work there from ’01 until 2013, I think.

JB: And you were hired as a cook?

JB: OK. What was a day like for you, a typical day?

BM: Well my days always good, you know, because I never make any trouble, always on time. I just be the first there and I open up. I had a key. And I started the breakfast until the others come and so on. So I was like an all-around-er. I go from one place to the next. I help do the dishes. I been cooking. I do everything. Sometime I go in five-thirty in the morning. And sometime when the others come I almost done do everything, setup and everything. But I love doing it, and from there we started lunch, so when the others come, and it was pretty good.

JB: What was your favorite part of your job?

JB: What were some of your favorite things to prepare?

JB: So there weren’t any big challenges?

JB: What were some of the children’s favorite menu items?

BM: Sometimes they like the cereal. We do some oats, cream of wheat, they like that. And sometime we do rice, chicken, I think chicken, they like chicken. But most of it, everything we do they probably like anyway. Some people fussy, but others will eat, and then they come back for seconds. So we do macaroni and cheese, and some days we have stuffing. We have a lot of vegetables. And they have the milk and the juice and everything and in the morning we make breakfast. Some days is cereal and some days is cheese sandwich and some days is sandwich, but everything they like and they eat – grilled cheese, and sometime we do hamburgers for lunch, and we do Sloppy Joes and thing like that, all kind of different stuff that the school lunch provide for us, we will do it.

JB:  What would you say was your biggest contribution to the program while you were there?

BM: Um-hum, and always be the first, sometimes the last to leave, gotta make sure everything, and help the others, like the dishwasher thing, and then some again, we have to talk and if they don’t have any dishwasher or anything I’ll step in, so I was like a jack-of-all trades. I don’t discriminate, “Oh, that’s your job and it’s not my job” or something. I do it, cleaning and scrubbing and everything.

JB: Do you have any memorable stories of maybe special children you’ve served or people you’ve worked with over the years?

BM: I work with a lady; her name is Donovan, Erica Donovan. She was nice too, and my other manager was Richards, Benjamin, Richard Benjamin or something, all of them were good.

JB: What advice would you give someone who was thinking of trying to get a job in the child nutrition programs today?

BM: In the school lunch program?

BM: I will advise them do the best you can put out everything that you wanted to do, and if you love children you do anything for them. And don’t discriminate or, “They not paying me for being early. They not paying me for being this and being that.” So if you have a good mind you just do things good. You don’t just say, “Oh, this is not mine.” Most of them will say, “Oh, you washing up. Oh, you are with this, you are with that” and so on. But while you contented, and while you love what you do, you don’t go back and say, “Oh, this is not my job. Let me do so. I don’t come help you because that your job and not mine, so.” And it depends on the people, it depends on them. But I do everything. I don’t discriminate on nothing. If somebody’s stuck at something else then, and I finish what I have to do, I help.

BM: I think I miss being there, but as you grow older you have to come out and do something easier, ‘cause in the morning time sometime I go in so early and the road so dark and everything, and still when I leave sometime it’s dark, but it’s so early sometimes five o’clock be so early and you can’t see the road too good. When you turn the lightening I be there. So it depends on what you like and what you want to do. Some of the girls, them don’t want to help you do nothing, and so, ‘cause I think they like those who are washing dishes, or what you call it, that they suppose to have to cook and so forth, but most of the time is I do everything.

JB: Well thank you so much for talking to me today.